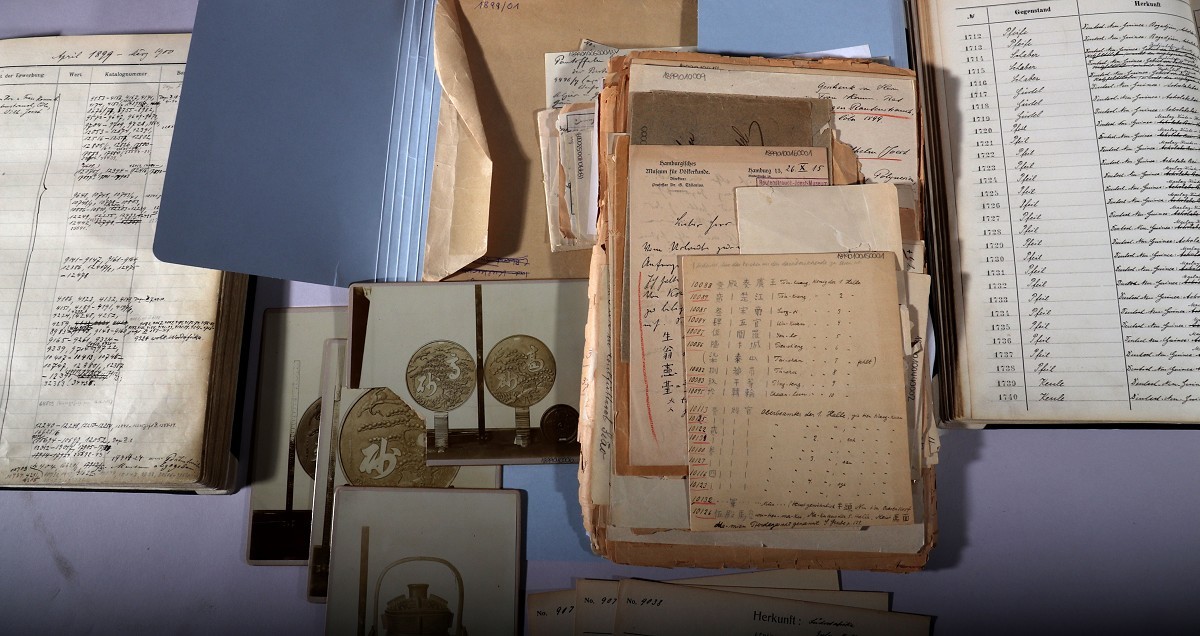 The RJM is committed to interdisciplinary postcolonial exploration of its collections. We support dialogue, knowledge exchange and cooperation with scholars, curators, activists, artists and actors of post-migrant society as well as with descendants of the societies from which the holdings originate. Polyphony and transparency are crucial elements of an ongoing decolonisation process: We are therefore currently working on a digitisation strategy while also seeking to discover and disclose the provenance of our collections. The aim of provenance research is to provide as complete as possible a picture of our collections’ history, from each object’s origin to its current place of storage – including the legal, political, cultural and scientific circumstances and perspectives under which it entered the museum. The topic is relevant enough for the city of Cologne to have established a Provenance Research Expert position at the Department of Art and Culture in 2007. So far, the focus has been on investigating the provenance of works of visual art confiscated as a result of Nazi persecution. Since 2017, the reappraisal of colonial contexts of injustice has also been discussed in a broader public context (“Provenance Research in Colonial Collections”). In this framework, we closely cooperate with the Colonial Provenances working group of the Provenance Research Committee, the German Lost Art Foundation, the Contact Point for Collections from Colonial Contexts in Germany and various international actors.

The RJM is taking up the challenge of comprehensively disclosing its holdings. A first step in this direction is the systematic examination of the entire collection within the framework of a research traineeship. For this purpose, the currently available information on provenances is to be reviewed and expanded.

The results will form the basis for the next steps, such as prioritising the holdings for in-depth research, expanding cooperation with societies of origin, and exchange with other museums. The results will also contribute to the overarching research landscape, e.g., in the form of publications and within the in-house presentation and communication concept.

Project funding: Ministry of Culture and Science of the State of North Rhine-Westphalia within the framework of the funding programme Forschungsvolontariat Kunstmuseen NRW (holder: Museumsgesellschaft RJM)

We are currently working on a concept for the systematic indexing of our holdings. Two further projects are dedicated to the collections of Wilhelm Joest and Max von Oppenheim. As a member of the Benin Dialogue Group, we are also questioning the 96 objects from the Kingdom of Benin that are among our holdings. Moreover, we participate in the interdisciplinary project International Inventories Programme on Kenyan cultural objects in the Global North. In June 2018, we were able to return a tattooed skull to New Zealand. We are currently studying the possibility of returning the head of a Vishnu sculpture to Cambodia. Our exhibition The Shadows of Things #1 explored how the skull and the Vishnu head ended up in our collection.

The RJM is part of “TheMuseumsLab”, a knowledge exchange programme for African and German museum professionals – one of the essential building blocks for future museum cooperation between Germany and Nigeria as well as other African countries. The RJM is one of ten cooperating cultural institutions from Germany participating in the pilot phase.

Benin – Objects from the Benin Kingdom

The Rautenstrauch-Joest Museum holds a collection of 96 works of courtly art from the Kingdom of Benin, in what is now Edo State in Nigeria. The museum had received these between 1899 and 1967 as part of 15 donations and purchases. It is considered certain that these 96 works of courtly art had been looted from the Royal Palace of Benin by the British Army in February 1897. In total, an estimated 3,000 to 5,000 such works had been looted at that time, subsequently ending up in museums worldwide, including the Rautenstrauch-Joest Museum.

Works of courtly art from the Kingdom of Benin

Research on the provenance of a skull from East Africa

The project aims to clarify the origin of a human skull from East Africa from the Lothar von Trotha collection. As commander of the "Kaiserliche Schutztruppe für Deutsch-Südwestafrika" Trotha bore the main responsibility for the first genocide of the 20th century. Little known is the fact that Lothar v. Trotha was also in other hotspots of the German colonial empire, for example in the 1890s in what was then "German East Africa". Under what circumstances did the skull come into the von Trotha collection? Can we perhaps even learn something about the identity of the deceased? Can we find documents mentioned in the museum archives that could shed light on this?

The project, which for the first time has access to extensive sources from the private estate of the von Trotha family, aims to contribute to further research into German colonial history and postcolonial provenance research.

The history of the Rautenstrauch-Joest Museum (RJM) begins with Wilhelm Joest (1852-1897), who had built up an extensive ethnographic collection on several journeys in the late 19th century. After his death, his sister Adele Rautenstrauch (1850-1903) donated his private collection to the city of Cologne and financed the construction of the RJM, which opened in 1906.

Since 1991, the Rautenstrauch-JoestMuseum has been holding Max von Oppenheim's (1860-1946) collection of artefacts on permanent loan. It consists of approximately 1,600 objects that Oppenheim had collected during his travels in North Africa and West Asia as well as during a 13-year stay as a diplomat in Cairo.

The research and exhibition project Invisible Inventories explores the question of how objects currently owned by cultural institutions in the Global North can be made accessible to contemporary Kenyan society. Invisible Inventories aims to place African perspectives and positions at the centre of the provenance and restitution debate.

more about the Invisible Inventories Programme

While the general public is growing more aware of colonial history with its atrocities and the problematic nature of colonial collections, museums found themselves at the centre of social debates. In this context, the French President Macron's initiative to return African objects has opened a new chapter in the long history of transcontinental entanglements.

A current restitution project was initiated in 2020 by the RJM with the support of the City of Cologne: Intensive research into the Khmer collection revealed that the head of a Vishnu sculpture was most likely taken from its country of origin illegally in the 1960s before it found its way into the RJM via the art market.

The research project "Recollecting Rapa Nui" is part of the ERC research group "Indigeneities in the 21st Century", which investigates how indigenous actors have developed from "disappearing peoples" into global actors. Based at the Institute of Ethnology at the Ludwig Maximilian University of Munich, the project operates at the interdisciplinary interfaces between anthropology, art, history, philosophy and politics, aiming to contribute to the (re)emergence of indigeneities and the (re)negotiation of their (post-)colonial heritage in and with Europe.

For Rapa Nui (Easter Island), the “visual gallery” aims to collect knowledge about artefacts, reconstruct the historical networks associated with them, and share them with contemporary indigenous actors. Part of the Rapa Nui collection came to the RJM through Pedro Atan Pakomio (1906-1976), an important Rapa Nui politician and artist, who was a crucial source of information for Thor Heyerdahl. RJM is conducting this project together with the Übersee-Museum in Bremen; other German and international partner museums will be added step by step.

On the occasion of a book presentation by Götz Aly (Das Prachtboot. Wie Deutsche die Kunstschätze der Südsee raubten. Frankfurt: Fischer Verlag, 2021) which took place on June 11, 2021, in our museum, you will find here an overview of our collection from the Hermit Islands (in German) as well as a corresponding excerpt from the inventory catalogue Art and Culture from the South Seas (in German). The Clausmeyer Collection, Melanesia, by Waldemar Stöhr (curator of Indonesia and Oceania at the RJM from 1951 to 1987), 1987. In 1966, the museum acquired the collection of the artist Klaus Clausmeyer (1887-1968) comprising over 1,000 artefacts. Among them was a wooden figure which, according to the attached label, had been sold in 1884 by Henning von Holtzendorff – a participant in the punitive action against the inhabitants of Luf Island from December 16, 1882, to New Year's Day in 1883. Stöhr explicitly speaks of "perverse punitive action" (1987:195).

The "Khmer Collection" of the Rautenstrauch-Joest Museum comprises 74 objects, mainly stone sculptures/fragments and ceramics from the Wilhelm Siegel Collection (57 pieces). There are also some bronze sculptures, stone rubbings, textiles – and a known forgery that was added to the collection after the special exhibition "Crime Scene Cambodia – On the Trail of a Forgery" (2017).

In the last three decades, about 20 objects were accepted from the estates of Wilhelm Siegel and Dr Alfred Jung, mostly ceramic vessels. In 2010, a Shiva lingam (dated 8th century CE), and in 2018, a contemporary silk brocade textile in the Khmer style were acquired.

The exhibition "Crime Scene Cambodia", which dealt with the theft and illegal trade of Khmer art, led us to taking a closer look at the "Khmer Collection". In the process, a Vishnu head (Inv. no.: RJM 51587) that had been in the collection since 1986 was identified as once having belonged to a Vishnu sculpture in the Prasat Bakong in Cambodia. Although there has been no explicit official request for restitution from the Cambodian government to date, the Rautenstrauch-Joest Museum is actively seeking to return the Vishnu head to its country of origin.

After formal approval by the Cologne City Council, the clarification of protocol on both sides and as soon as Covid-related travel restrictions are over, the Vishnu head can return to Cambodia. The National Museum in Phnom Penh will be contacted respectively.

more
BENIN
Objects from the Benin Kingdom
Wilhelm Joest
Wilhelm Joest and the Intimacies of Colonial Collecting
Max von Oppenheim
Processing of the documentation on Max von Oppenheim's collection of realia in the RJM
Conference
Museum Collections in Motion 15.7.-17.7.2019